The private tour to Corinth Canal and to Ancient Olympia specialty designed for those who want to experience the power Olympia and to feel the spirit that has inspired thousands of years countries and athletes, the birth pace of the Olympic games. Also is an excellent opportunity to see the most famous areas for olives tries field, olive oil, and vineyards. As Greeks say, Greece is not just the islands and Athens. Corinth and Olympia are among the most famous sites in the world, especially considering the importance of the Olympic games.

Your Athens Tours Greece private tour driver will travel you along the coastal road of the Saronic Gulf until we reach the Corinth Canal with its breathtaking views. After enjoining the Corinth Canal we will continue through the high way passing close to Tripolis, Sparta, and close to kalamata with its marvelous landscape to Olympia.

We will visit the archaeological site of ancient Olympia and you will have free evening to enjoy the small city of Olympia. Overnight in Olympia

After breakfast your Athens Tours Greece tour driver will drive you towards the city of Ancient Olympia, to the birthplace of the Olympic Games.

In 776 BC, Iphitos, king of Elis, Kleosthenes of Pisa and Lykourgos of Sparta reorganized the Olympic Games in honor of Zeus and instituted the sacred ekecheiria, or truce. Soon the quadrennial festival acquired a national character. Its fame rests upon the Olympic Games, the greatest national festival and a highly prestigious one world-wide, which was held every four years to honor Zeus. The most important sanctuary of God Zeus is situated here, as well as Altis and the original stadiums of the Games. 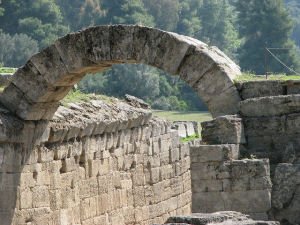 Ancient Olympia has been the center of attention during the ancient years, and still today is the starting point of the Olympic Flame that is born here, every four years prior to the new festival. Experience a run in the ancient Olympic stadium, the starting line is still visible, take your position, and run this historical course, competing with the athletes of the past, or simply the tourists that flock to this area. Visit in this private tour the Olympia Archaeological Museum and the Museum of the Olympic Games, where artifacts and collections related to both ancient and modern Games

Drive back to ATHENS arriving late in afternoon.

As a cruise tour is highly recommended for Cruise passengers, visiting Athens before their embarkation or after disembarkation to enjoy this spectacular private cruise excursion

Scroll back to top