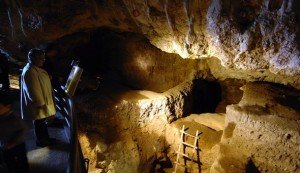 Just  3 kilometres before reaching Meteora, a huge lime rock rises above the village of Theopetra. On its north-east side there is a cave bearing the same name: Theopetra Cave. It is a prehistoric site situated in the western part of the Thessalian plain, at the foot of the Chasia mountain chain, the natural boundary between Thessaly and Epirus.

The cave is situated approximately 100 metres above the surface of the plain and 280 metres above sea level. The Lithaios River, a tributary of the Peneios River, flows in front of the cave. The mouth of the cave is 17X3 metres whereas its main chamber, measuring 500 square metres, is rectangular and has side niches.

Systematic excavations have brought to light geological deposits of the Pleistocene and the Holocene and anthropogenic deposits reaching a total thickness of approximately 6 metres. This discovery confirms the view that the cave must have been inhabited continuously during the Middle and UpperPalaeolithic, the Mesolithic and the Neolithic era. Specimen (eg. coal, human bones) from deposits, whose age has been estimated using methods provided by the natural sciences, confirms beyond any doubt that the cave was occupied from approximately 50,000 till 4000 BC. Its temporary use continued during the Bronze Age and historic times and continued up to 1955.

The excavations and study of the remains in Theopetra Cave have been conducted since 1987 by the scientific research group of the Ephorate of Palaeoanthropology-Speleology, under the direction of Dr. N. Apostolika-Kyparissi.