The battle of Thermopylae at the Hot Gates of Greece

In 490 BC, after the defeat of the Persians at Marathon by the Athenians and their allies, King Darius began to gather an army to conquer Athens and throughout Greece for revenge. So picking the best men from all provinces of the Persian Empire and trained specifically for this campaign.

Thermopylae, also known as Hot Gates, is a small region in Central Greece, carrying the legend and valor of a great and touching moment in Greek history.

Furthermore, in Laconia, King Leonidas of Sparta was training men for the same reason: to counter a possible attack even the Persians in Greece. For this very reason he campaigned to gather allies and to prepare them for the impending war.

The anticipation and this intensity lasted 10 years. Meanwhile, King Darius died and was succeeded by his son Xerxes, who continued the recruitment of men of the empire with higher rates.

Around 484 BC King Xerxes begun from Asia Minor to conquest the Greeks and destroy Athens. When he reached the Hellespont he built a bridge with his ships of the fleet to allow the rest of the army and cavalry to pass.

The Battle of Thermopylae 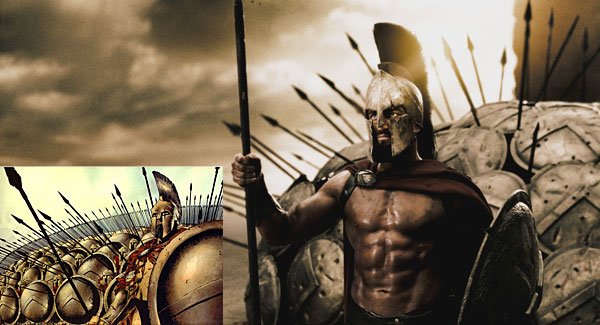 In a council organized at Corinth, Greeks decided to send a small team at Thermopylae to face the Persians and to stop their march south until they are better prepared for a long battle. Thus, in 480 BC the allied army of 7,000 Greek soldiers who were led by 300 Spartans and King Leonidas reached the Pass of Thermopylae, which at that time was just 12 meters wide.

In the Straits the allied Greeks restored an old wall that was built to protect the old south. The Spartans were the best fighters of the ancient world, since from a very early age young children were trained in the art of war.

Spartans had anyway taken part in many battles during that period. This resulted in a perfect cooperation between the verses of the phalanx. Their bravery and courage  was such that when someone said he had seen the Persian army and that the archers would throw arrows that would hide the sun, a well-known Spartan named Dienekis laconically said: “Well, then we will fight in the shade.”

King Xerxes, who had set up his throne on a hill, had sent a representative to King Leonidas to tell them to give up their weapons and accept an offer according to which Xerxes would make the Spartans dominants in Greece after the victory of the Persians. Leonidas responded with the famous “molon lave” (come and get them).

The Beginning of the Battle at Thermopylae

Because of the narrowness of the passage, Xerxes could not send the whole army to destroy the Greeks, but only 1000 each time. The battle was fierce with many victims from the side of the Persians.

The Persians had too light weapons, with almost no armor and shield, but the Greeks had heavy armor. Only their eyes looked underneath the slits of the helmet and the rest of the body was covered from the chest, greaves, armbands and a huge bronze shield.  The Greeks’ armor was superior to their opponents.

At the end of the first day the Persians had lost 2000 men and the Greek allies around 100.

The end of the battle at Thermopylae

The Battle of Thermopylae normally should last a few hours, based on numbers, but lasted 3 full days with terrible losses of the Persians.

Eventually a Greek traitor named Ephialtes showed Xerxes a secret and very narrow passage from which it could outflank the Greeks. That night Xerxes again sent the royal guard, the 10,000 “Immortals”, who arrived at the rear of the Greeks in the morning. Meanwhile, during the night the spies of Leonidas had warned him about the movement of Xerxes.

Leonidas decided to drive out all allies allowing only the Spartans to stay and die on the battlefield honored. According to Herodotus Leonidas had received an oracle from Delphi saying that either Sparta would be destroyed or would lose its king. Leonidas chose his death instead of the destruction of his city. The end of the battle was tragic.

It is said that the Greeks after breaking all their weapons started fighting with their teeth and nails. King Leonidas was killed on the battle. Four times the Persians tried to get his body, but all four it was protected by the Spartans who managed and took back the body of their King. Finally Persians killed all 300 Spartans.

After this at the battlefield of Thermopylae a sign was erected  that read:

Stranger, announce to the Lacedaemonians (Spartans) that here we are lying (dead) , faithful to the sacred task entrusted to us.