The amazing legend of Marathon and Thermopylae 8-h; This special private tour is designed for those interested to discover the most important battles of the ancient world through history in order to discover the mysteries of that age! The plane of Marathon and Thermopylae. Why only a few Greeks stood against many! Why was the Marathon battle against the Persians so important? The battle is considered a defining moment in the development of European culture.

Marathon! The battle that has changed the world!


Historians argue that this victory back in 490 BC was pivotal in the development of Western civilization because it preceded a flowering of Athenian culture that led to great advances in mathematics, drama, philosophy, and astronomy. In other ways, we may have not known the world as it is today. Maybe Europe, Asia, or America would not exist as we know them today!
The legend has it that after the battle ended, Phidipides, a daily runner as they used to call them, was immediately dispatched to deliver the good news to Athens, roughly 26,219 miles away or 42,195 Km: the world’s first marathon. Upon arrival, the heroic messenger exclaimed, “Rejoice, we won!” 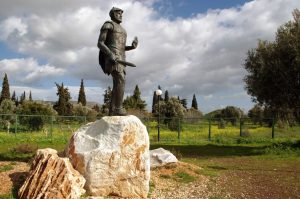 We’ll follow today the original Marathon Race, as you will understand by following the signs that count each mile – kilometer. Admire the impressive starting line of the classic Marathon run! Visit the Tumulus of the Athenians that portrays their victory against the Persians in 480 BC. Next, we’ll see the Marathon Battlefield, the Marathon archeological Museum, the prehistoric cemetery that proves the first civilized presence in this location, and the museum of the Marathon run.

Continuing our private tour we’ll stop at Marathon lake and the Marathon dam famous for the unique structure made with the Pentelic marble same as the Acropolis marble. The Marathon dam is operating as the water reservoir for Athens.

It’s time now your tour driver to take the way to Thermopylae (Hot Gates). The time is August 480 B.C.; the place; Thermopylae, Greece, the occasion; the aftermath of a great battle. 10 years after the defeat at Marathon, the Persian invasion of Greece was resumed by King Xerxes in 480 BC. A vast army of Persians was on the march to conquer Greece. A small force of Greeks had been all that stood in their way. And yet, in a pass that narrows to a space smaller than a baseball diamond, the impossible almost happened. For three days, just over seventy to one hundred Greeks, spearheaded by an elite unit of three hundred Spartans, gave a savage beating to the Persian army that outnumbered them by perhaps 30-to-1. About 200,000 men willing to die for the glory of Xerxes, the Persian Great King, came up against the most efficient killing machine in history. 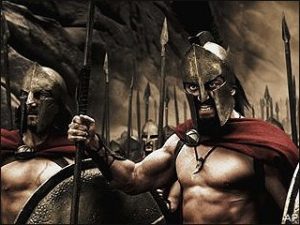 Led by Leonidas, the three hundred Spartans stood and fell taking the pride of the Persian Empire down with them. Sparta the steadfast and self-sacrificing, Greece unflagging in its fight for freedom, Xerxes the flummoxed, Efialtis the traitorous: These are the images left in the summer heat. Thermopylae battle has been considered a prototype ever since inspiring many Generals all over the world victoriously.

… to fight the Greeks at Thermopylae had finally punished the Persians. Xerxes had learned how high the price of the victory would be if he could pay it at all. How hard to think that so few men could devastate so many. Yet Thermopylae is no ordinary place — or rather, was no ordinary place. The silting-up of the land over the millennia leaves the ancient scenery hard to recognize today. Yet what a landscape it was.

Leonidas didn’t want any songs or any tributes. His wish was simple; Remember us! Remember why we died! And the brave 300 Spartans died but their legend stands and echos through the centuries.  Today it teaches us; “even if a beast of men and horses is threatening you, you don’t retreat and don’t surrender. You stand and fight for your rights and die for your country”. After all, that was the Spartan law! The greatest honor for a Spartan was to die for their country. Freedom for us all is the greatest value!

Spartans; The best soldiers the world has ever known!

To conclude, you will visit the battlefield in Thermopylae, the monument of the 300 Spartans, and the statue of Leonidas standing exactly opposite Kolonos Hill (visit) where the persistent Spartans left their last breath. A place too sacred for words. The statue of the 700 Thespian and the hot springs.

On the way back to Athens, we’ll have a short stop at Kammena Vourla, a little town on the water to enjoy a traditional Greek lunch by the sea.

Open of the Archaeological Museum of Marathon