A specially designed and organized sightseeing tour is the perfect way to get to know the historical capital of Rhodes and its worldwide famous butterfly valley.

Highlights of the Half Day Tour in Rhodes

Description of the Rhodes half-day tour 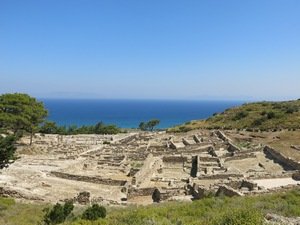 air-conditioned sedan or minivan and commences with a visit to the Archaeological site of Kamiros, which was one of the three powerful cities of Rhodes and has been inhabited, according to the findings of archaeological research, since prehistoric times.

It reached the height of its prosperity at the same time as the other two Doric cities, Lindos and Ialyssos. Like them, Kamiros began to decline after 408 BC. This site continued to be inhabited up to the early Christian era. It is a necropolis which was abandoned for unknown reasons, since research shows that it did not suffer an enemy attach nor any other form of devastation. During its period of prosperity, Kamiros minted its own coins.

On the surrounding hills, ancient burial grounds have been found. In one of the graves was unearthed the famous stele of Crito and Timarista, which is one of the most important exhibits of the Archaeological Museum of Rhodes.

The city of Kamiros was built amphitheatrically, on a hill. On its highest point stood the acropolis, which was unfortified, as was the city itself. Within the precinct of the acropolis stood the temple of Athena Polias (3rd or 2nd century). The remains of the foundations are still visible today. There was also a large cistern of the 6th or 5th century, and a stoa (portico) of the end of the 3rd century, measuring 200 meters in length and lined with two rows of Doric columns. 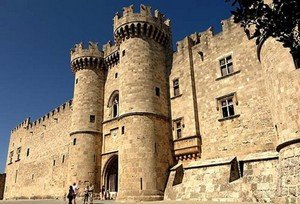 Our shore excursion continues to the Monte Smith Hill which offers a magnificent view of the Aegean and the City. Our drive continues past the ancient Rhodes Acropolis dedicated to Zeus Polieus, Athena Polias and Pythian Apollo. Four columns of this Acropolis have been reconstructed.

Drive next past the 2nd century ancient Stadium and Theatre, of which both have been restored. From there the excursion continues to the D’ Amboise Gate where the guests disembark and on foot enter the Medieval City to visit the Grand Master’s Palace, the most imposing building of medieval Rhodes. It was originally built in the 14th Century, but demolished by an explosion in 1856. It was restored in 1939, during the Italian occupation.

Continue down ‘The Street of the Knights,’ which, in spite of the restoration of its buildings, has remained untouched by the passage of 500 years, since it was originally built in the 14th century. The Gothic order predominate the entire street. The Inns of the various ‘Tongues’ stand in a row, with impressive arched doorways, their emblems carved above them.